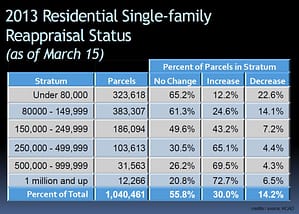 The distribution of single family parcels in Harris County is shown below (according to HCAD). Â Roughly 893,019 homes (85.8% of the total number of parcels)Â make up the residential sector of the tax base that is assessed below $250,000. 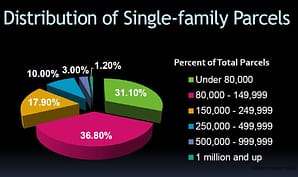 Wondering if you should protest property taxes? Â PropertyTaxReduction’s online assessment tool will tell you “YES” or “NO” as to whether or not you should file an appeal. Â The determination is made by an analysis of the availability of evidence that would likely result in a successful property tax protest.

Live in a county other than Harris? Protesting property tax in Fort Bend County (FBCAD), Brazoria County (BCAD), Montgomery County (MCAD), andÂ Galveston County (GCAD), is easy too. Our evaluation tool works in for residential properties in these counties as well, and will give you a very good idea of your likelihood of success.